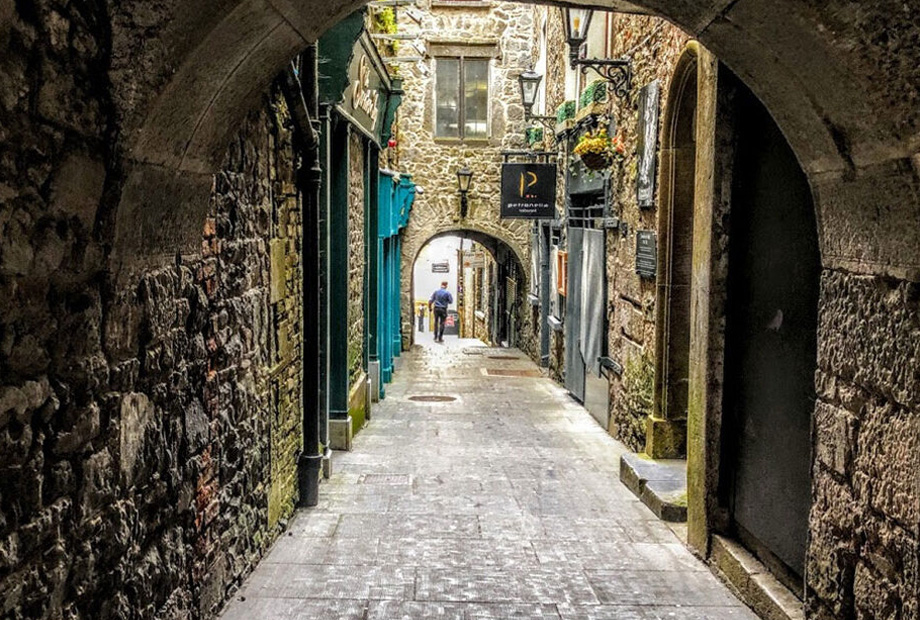 St Canice was a great friend of St Columba (Colmcille), the Apostle of the Scots and founder of the monastery at Iona. The story is told that St Columba was once caught in a storm at sea. His fellow monks cried out for him to pray for them, but St. Columba calmly replied that he would leave the praying to Canice in distant Aghaboe. His friend meanwhile leapt up so suddenly from his meal that his shoe came off as he rushed to the church to pray for his imperilled friend. The storm immediately passed, and St Columba told his green-faced companions ‘the Lord has listened to Canice’s prayer and his race to the church with one shoe has saved us’. St Canice established a monastery at Aghaboe (30 km north of Kilkenny), which became the seat of the bishop of Ossory.

Records show that a wooden church on the site was burned down in 1087. The existing structure was raised between 1202 and 1285, but then endured a series of catastrophes and resurrections. The first disaster, the collapse of the church tower in 1332, was associated with Dame Alice Kyteler’s conviction for witchcraft. Her maid Petronella was also convicted, and her nephew, William Outlawe, was implicated. The unfortunate maid was burned at the stake, but Dame Alice escaped to London and William saved himself by offering to reroof part of St Canice’s Cathedral with lead tiles. His new roof proved too heavy, however, and brought the church tower down with it.

In 1650, Cromwell’s forces defaced and damaged the church, using it to stable their horses. Repairs began in 1661; the beautiful roof in the nave was completed in 1863.

Designed by William Deane Butler, the cathedral draws its inspiration from Norman architecture. Not a large cathedral by the standards of the day, with many slightly later cathedrals by J.J. McCarthy being far larger, the building is cruciform with a nave of five bays and aisle-less transepts.

St. Mary’s is made from cut-limestone which was sourced locally. The cathedral has a cruciform plan and its style is described as ‘Early English Gothic’.[2] The design is believed to have been based on Gloucester Cathedral in Gloucester, England. It is situated on the highest point in Kilkenny City and is a significant local landmark.

The Church of Saint John the Evangelist, or John’s Church, is a Gothic Revival-style church in Kilkenny, Ireland. The Church was designed by William Hague and built from 1903 to 1908 on the site of an earlier church located in the graveyard. The grounds contain trees and greenery. Also known as the O Loughlin Memorial Church.

The Augustinians developed a priory on the east side of John’s Bridge in 1211 under the patronage of the Marshalls and their church was to function as the parish church. The surviving church remains consist of the early thirteenth-century chancel with a Lady Chapel, built around 1280. The surviving burial monuments reflect patronage that was derived, until the sixteenth century, from the Irishtown elite. The Thirteenth and fourteenth-century tombs commemorate ecclesiastics and prominent lay people such as John Talbot (sheriff, died c. 1385) and Richard Forestal (burgress, died c. 1400). During the sixteenth century, it was the burial place of the Earls of Ormonde, the Graces of Courtstown, the Shortals of Ballylarkin and the Purcells of Foulksrath.

Kilkenny City, arguably the capital of Medieval Ireland, was the caput of one of the most famous personalities of the western medieval world, William Marshall, 1st earl of Pembroke (d.1219).  Widely known as the quintessential medieval knight, William Marshall was also an administrator, magnate and builder of towns and churches, founding the Augustinian priory at Kells and the Cistercian abbey at Tintern.  It was likely his son, Richard Marshal, 3rd earl of Pembroke (d.1234) who like founded Kilkenny Franciscan friary, sometime between 1232 and 1240. His brother William, 2nd earl of Pembroke founded the Dominican priory in 1225, and it is there that Richard was buried in 1234. The first documented reference to the Franciscan friary occurred in 1245 when the Friars received a royal grant. The most famous reference appears in the annals of Friar Clyn, a member of the Franciscan community in Kilkenny in the fourteenth century.  Of the original foundation, only the thirteenth-century choir, the fourteenth-century tower and the restored sacristy remain. Excavations in the 1960s and 1980s have revealed the existence of a north aisle and a large chapel arm (or so-called transept), as well as the foundations of the cloister and of domestic buildings. The remains of the church now lie within the ground of the former Smithwicks’ brewery.

In 1207 William Marshall, Lord of Leinster, gave the town of Kilkenny a charter, setting out the rights he was granted to its citizens. In 1609, King James I of England (and VI of Scotland) made Kilkenny a city and gave it a new charter, under which it was governed until the mid-19th century.

The Black Abbey played a major role in the civil and ecclesiastical life of the city until 1543 when King Henry VIII confiscated it and converted it into a courthouse. Though the years of occupation left the abbey in ruin, it was eventually restored and opened for public worship in the 19th century.

The Medieval Mile Walking Tour Highlights are: Kilkenny Castle and the ghost in the White Dress The possible Richard Shee curse of the Shee Alms House The Tholsel where you paid taxes. The famous Butter Slip and its famous Rhyme.

Pats Ruby Tour: This extended Walking Tour includes the Eastern environs of Kilkenny which was also part of the medieval Walled town of Kilkenny. Often referred to by the locals as the Continent side of Kilkenny!! The Walking tour will